If you apply for hunts across the west, then you are no doubt at least casually familiar with a few of the common systems used to conduct tag drawings. Methods include completely random drawings, bonus points (sometimes squared) and pure preference points systems. In this article we will look at one system that appears unique - Colorado's weighted points for sheep, moose and goats.

The weighted point system seems to be a target for periodic debate among some in the community. Not entirely surprising, given the large number of unsuccessful applicants that have invested many years and many dollars in pursuit of Colorado sheep, moose and goat tags. And occasionally it's the weighted point system itself that draws the ire of high point holders. So how does this system, with it's "divide by" method, compare to other point systems in terms of draw odds? We set out to explore the numbers.

Nearly all tag draw systems are built around the same fundamental concept: each application is ultimately assigned a single random number, and the applications with the lowest numbers are awarded the tags.

Bonus point systems are designed to give applicants with more points increased draw odds by giving multiple chances to obtain a low random number. In contrast, Colorado's weighted point system achieves the same by assigning each application a single random number, but then that number is made smaller via mathematical division. If you are unfamiliar with the details of how weighted points work, here is an explanation from Colorado Wildlife & Parks.

Here at Toprut we do full drawing simulations with the actual applicants and their point totals to more accurately determine draw odds. In practice we repeat each drawing many thousands of times in order to get good statistical results. Our weighted point draw simulation confirmed that with each additional point, your overall draw odds increase rather linearly. So if you plot the odds by point level for any specific hunt on a chart you end up with effectively a straight line: 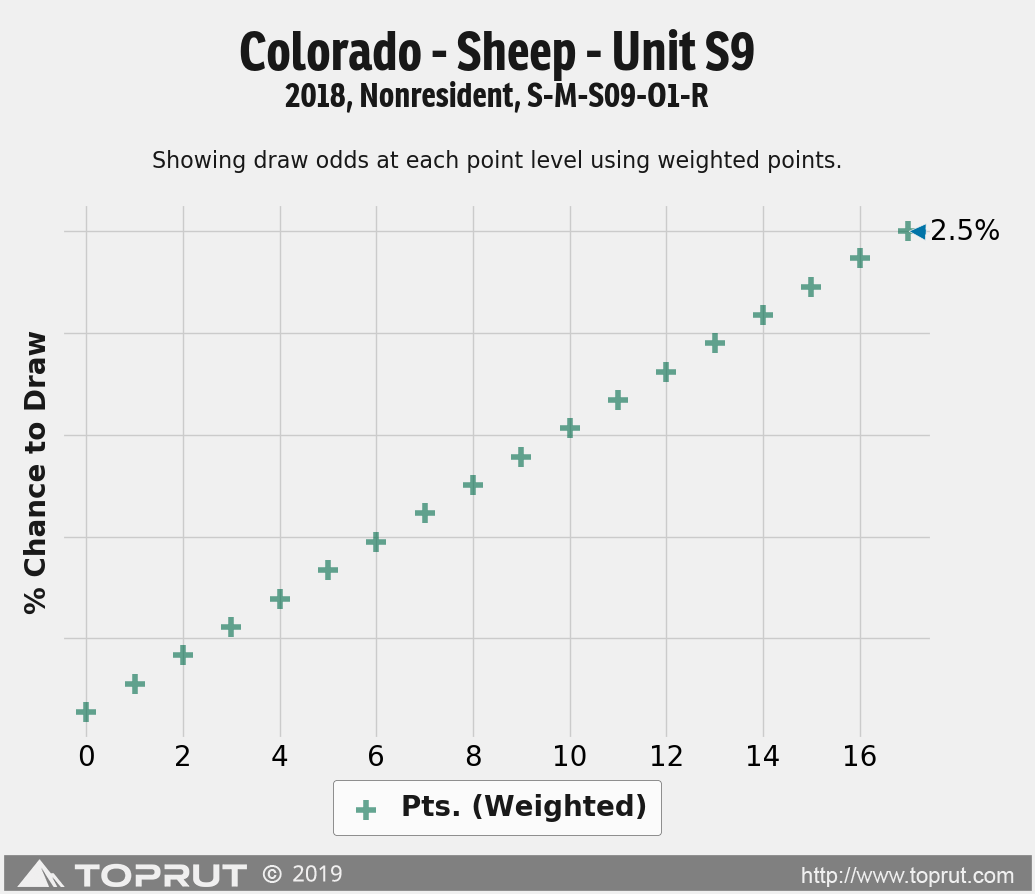 Does that sound suspiciously similar to how traditional bonus point draw odds might work?

One of the advantages in doing full draw simulations is that once you have everything in place it's extremely simple to change the point system used and run a series of "what-ifs".

For our what-if drawings we used the 2018 Bighorn Sheep draw applicant pools and tag quotas but the resulting conclusions would apply equally to Moose and Mountain Goat.
The Colorado weighted point draw utilizes a unique process to assign an initial random number to your application. For the purposes of these tests we will assume random number generation is "fair" regardless of the specific method used to generate the randoms.
Weighted Points vs. Bonus Points

The first drawing simulation we conducted replaced weighted points with a traditional bonus point system - where each point gives you another chance to draw a low random number. So if an applicant had 5 weighted points in the actual drawing, that would translate to 5 bonus points (+1 for current application respectively). We then plotted a comparison of the actual draw odds from the weighted point draw, to the raw simulated odds per point level if bonus points were used instead. Here are some actual hunt results: 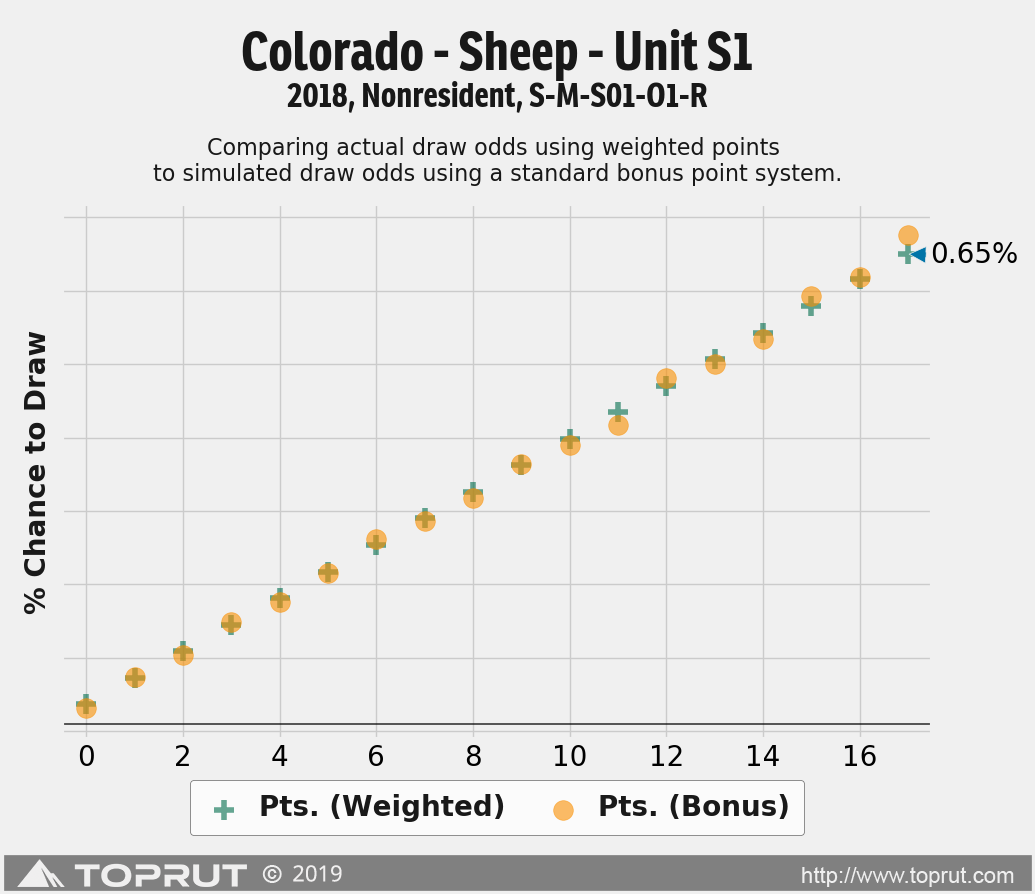 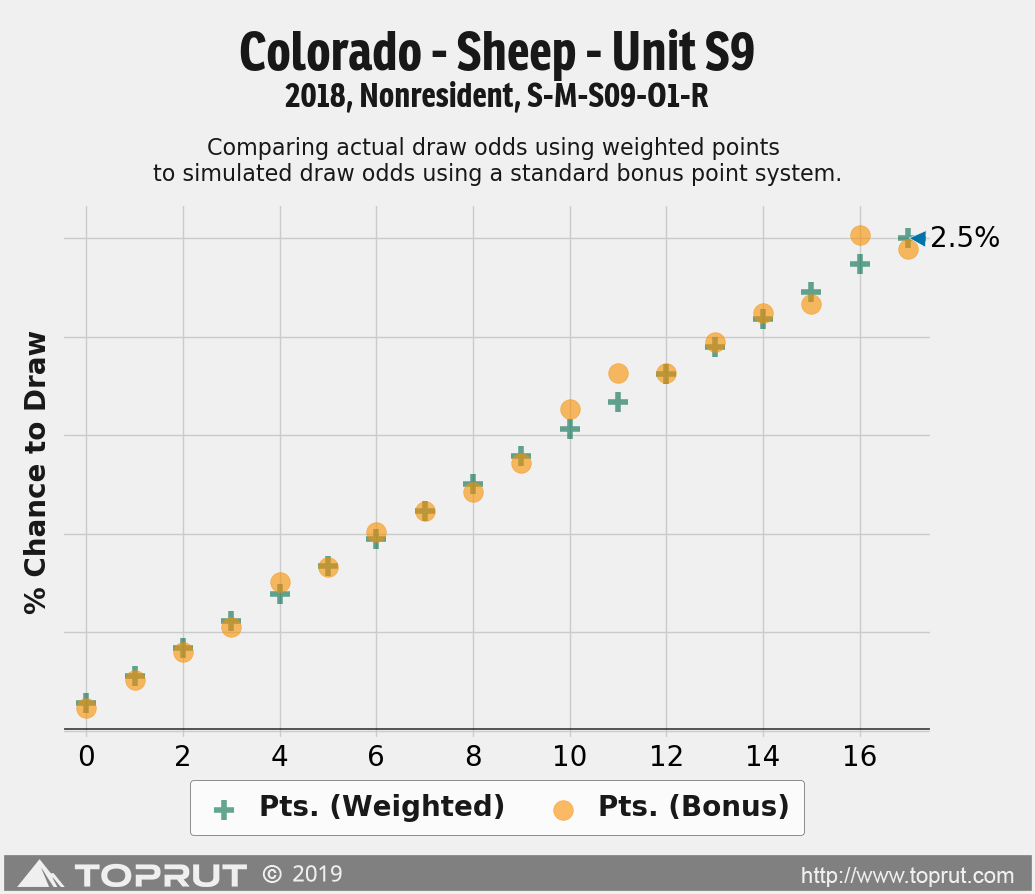 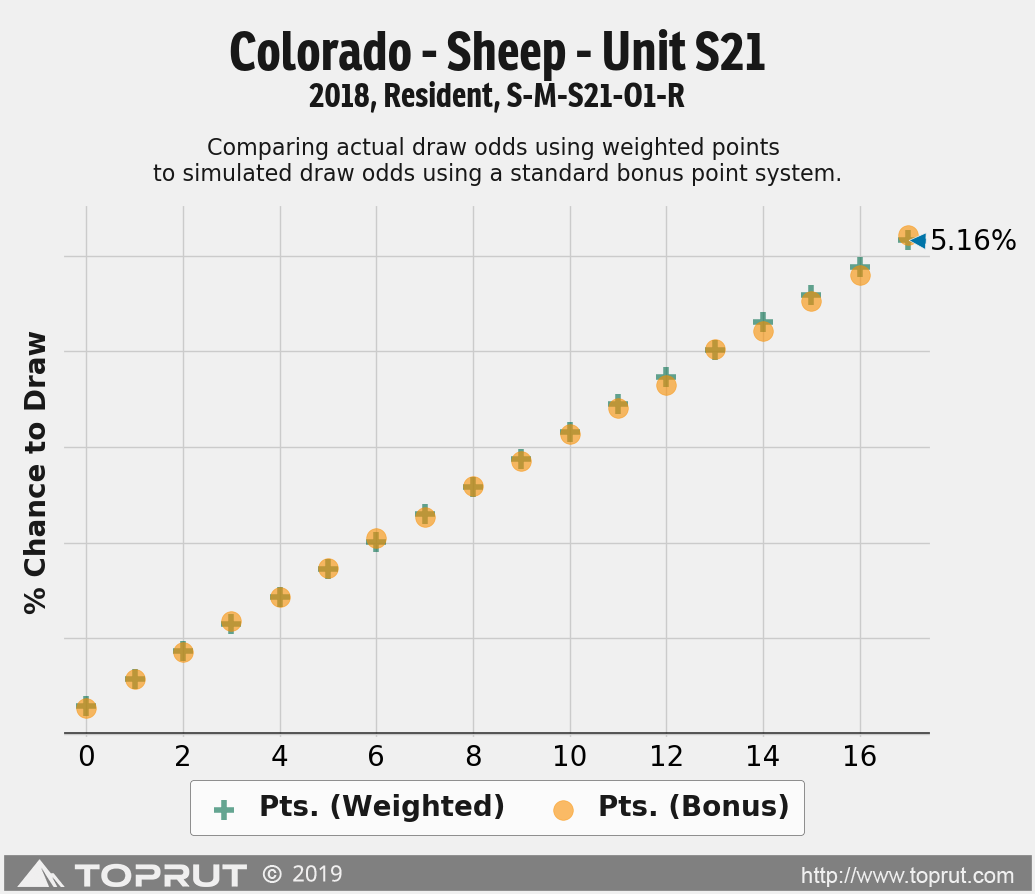 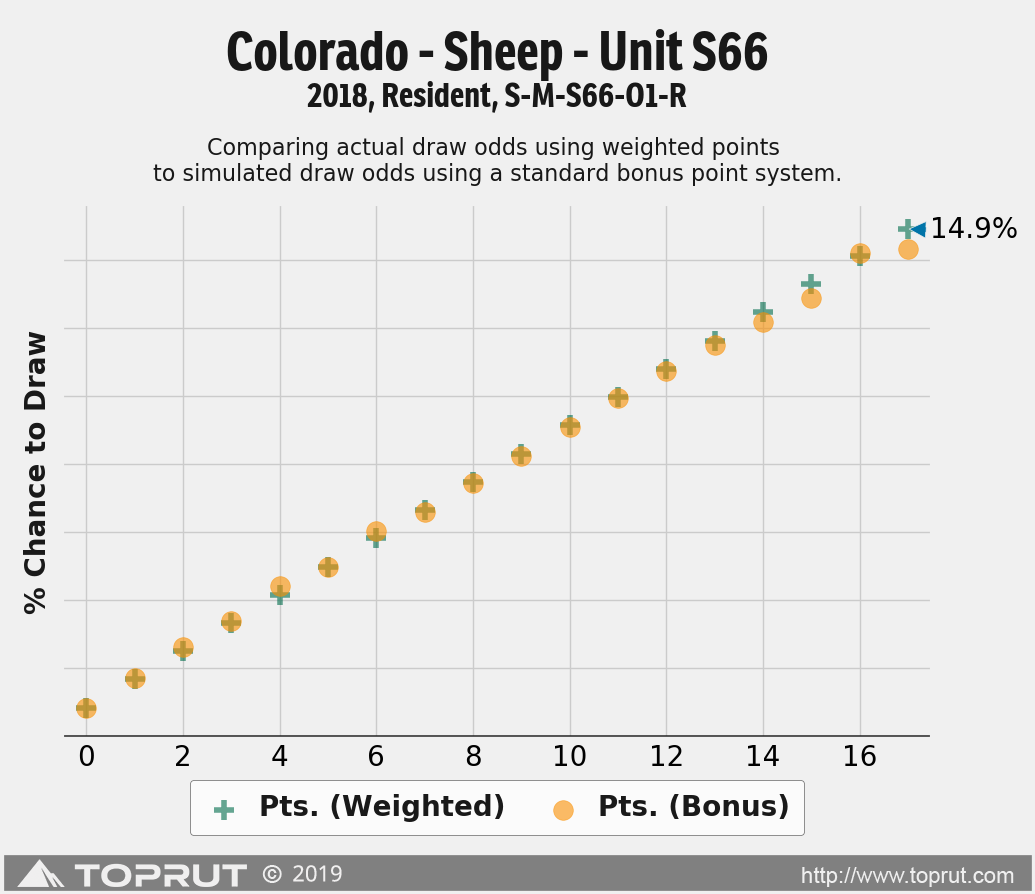 The points plotted for the bonus point odds in these charts are the raw averages direct from our draw simulations. If we were to mathematically fit a line to each series of points, it would further confirm what is clearly evident: that both methods produce the same end result. For purposes of determining current draw odds for a ram, bull moose or billy tag in Colorado, the weighted point system and the bonus point system are indistinguishable from one another.

It should be noted that at higher draw odds levels (and total tags > 1) the weighted and bonus point systems begin to differ a bit. When this occurs the weighted point system is actually slightly more favorable to the high point holders than traditional bonus points.
Weighted Points vs. Squared Bonus

The next draw simulation we ran was done with a squared bonus point system like Nevada's. So if an applicant had 5 weighted points in the actual drawing, that would translate into 25(+1) chances to get a low random number in the drawing. Here are the same 4 hunts charted that also include the additional plot showing what the draw odds would have been in a squared bonus point system: 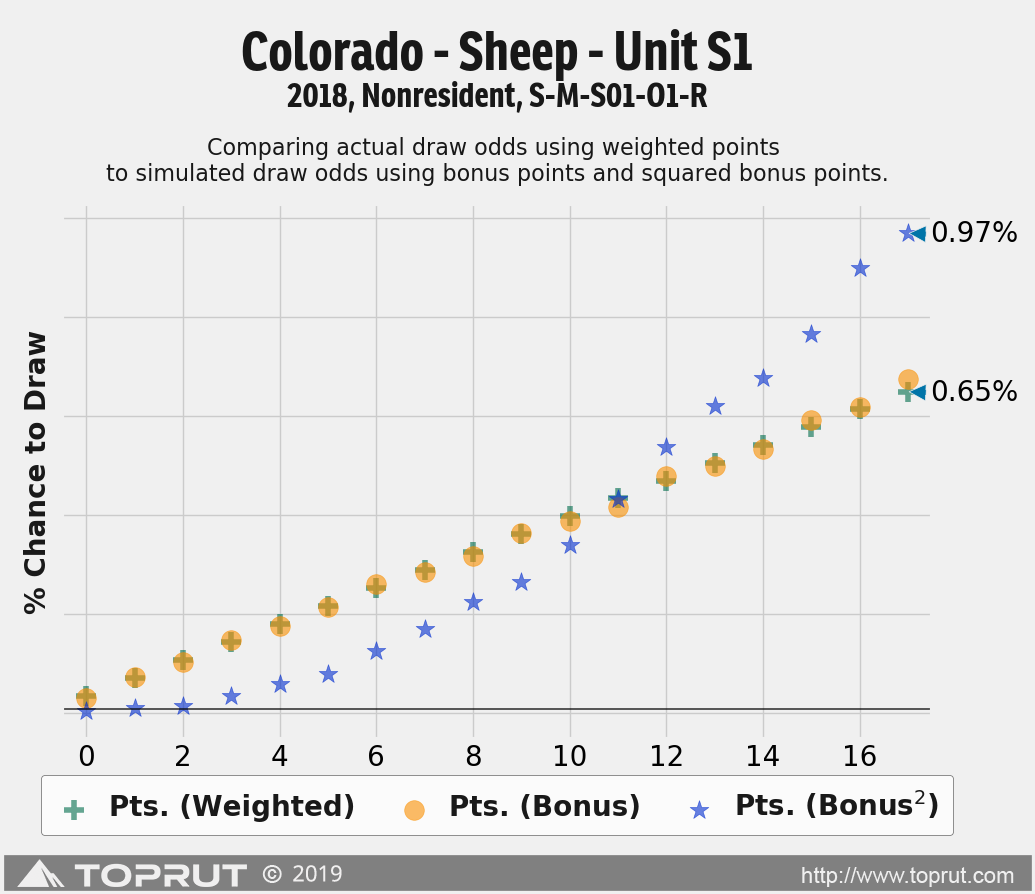 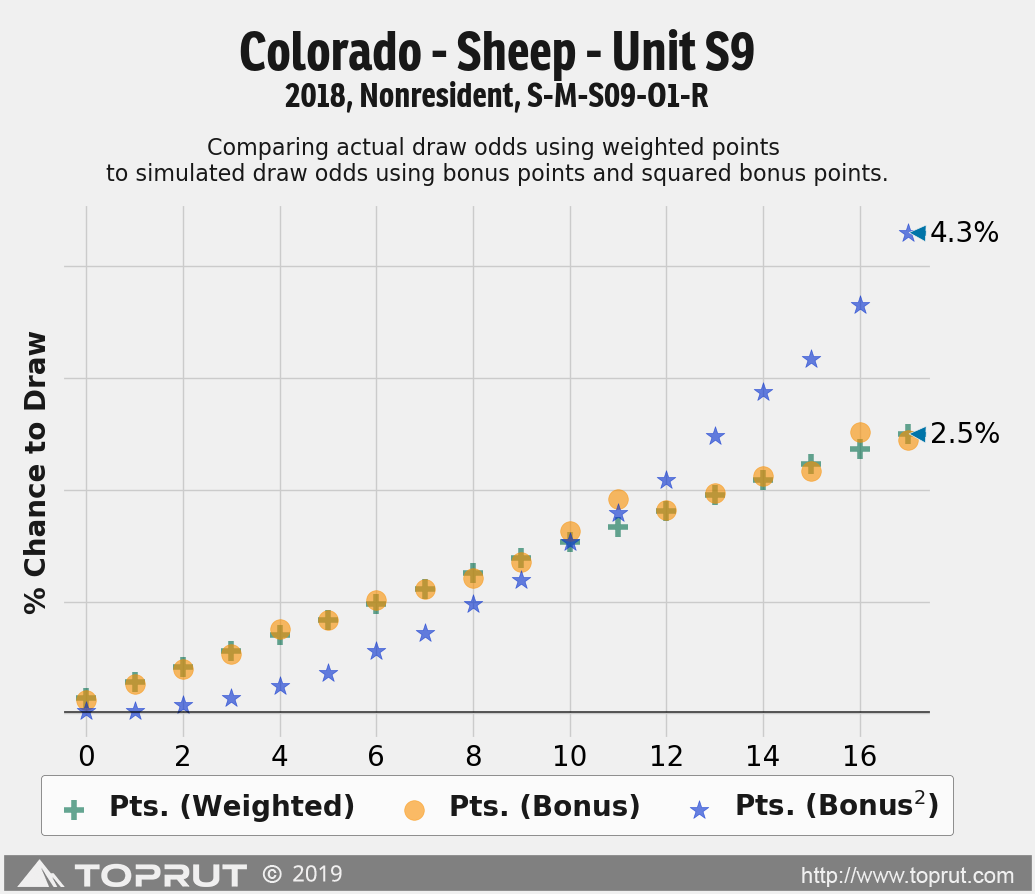 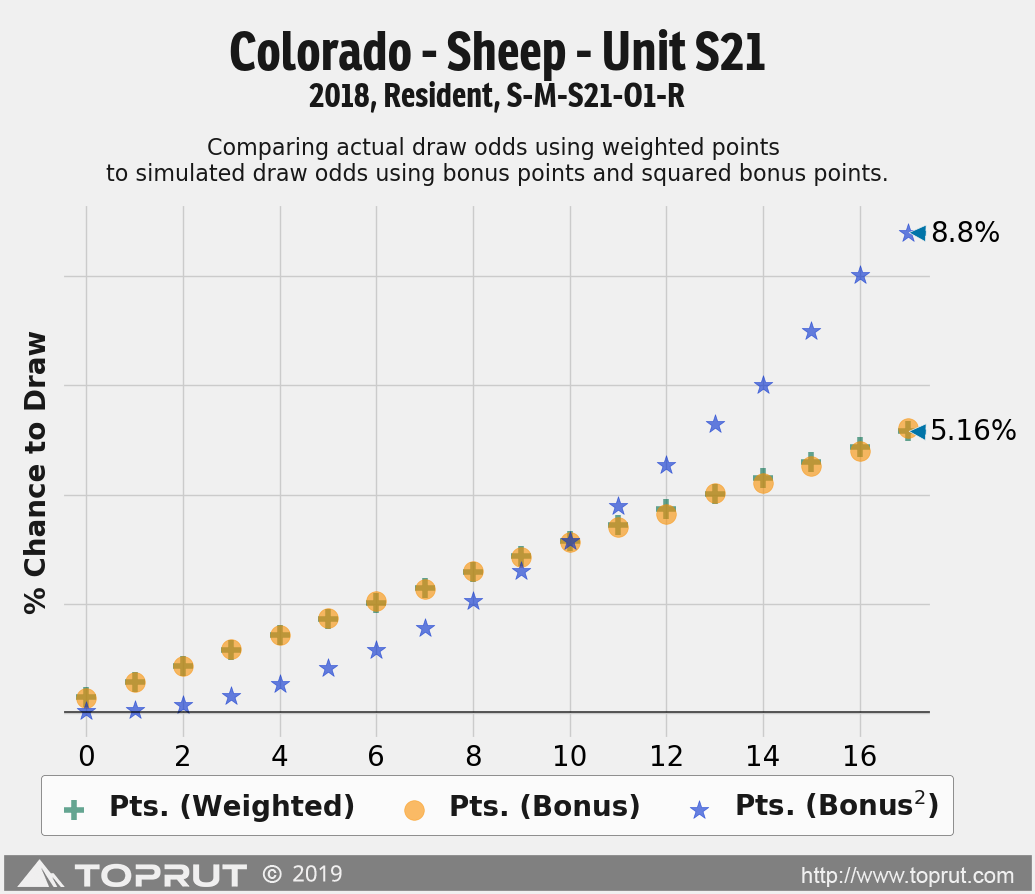 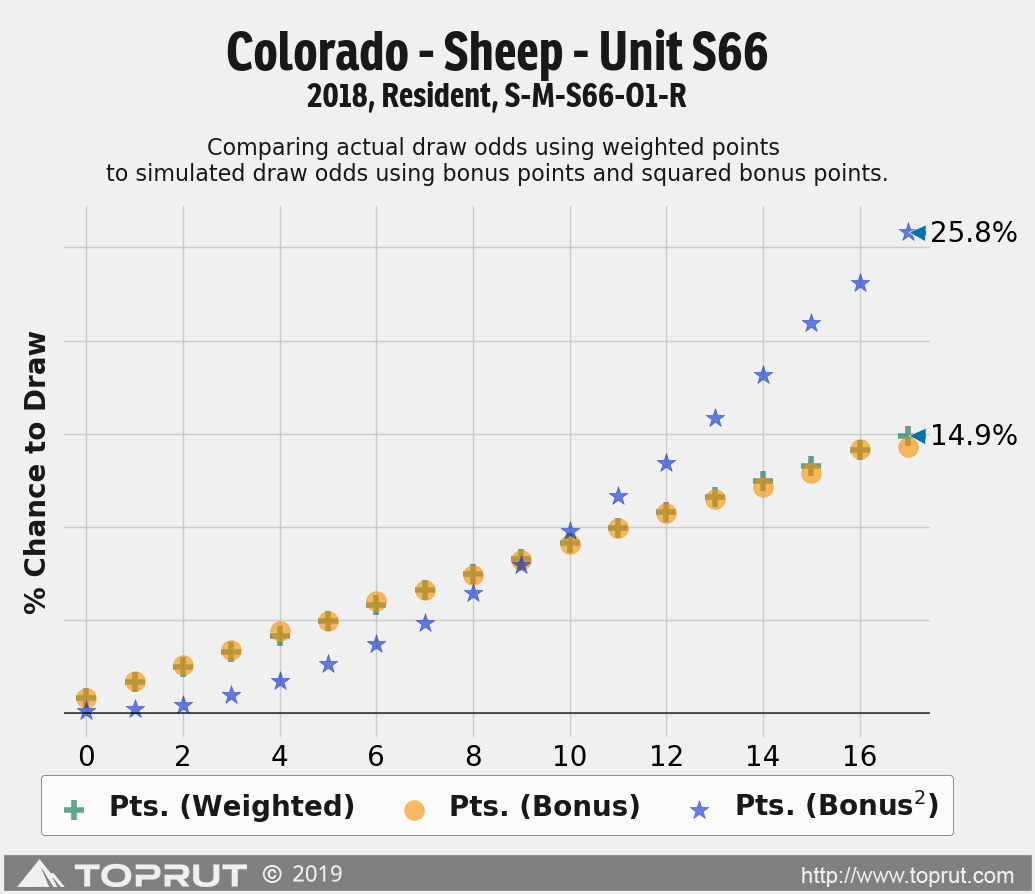 As expected, in a squared bonus point system the very highest point holders receive the most benefit, and the lowest point holders get the least reward. At 17 points the difference in relative draw odds increases somewhere in the 50 to 75% range. As the number of points decrease this relative difference gets smaller and smaller until eventually the weighted point and squared bonus point systems have about the same odds. In practice this currently happens somewhere around the 10-11 point mark.

Below 10-11 points, the squared point system would produce reduced draw odds in comparison to the current weighted method. Relatively this difference can be very significant from about 0 - 5 points. But in actual draw odds both systems result in very poor chances that any specific individual will be successful at the lower point levels.

In all of these cases, the simple random odds for every applicant turn out to be equivalent to about the weighted point odds at 4 or 5 points in the current system.

Although it is an interesting exercise to explore the other point systems with some real application data, the reality is that demand for these tags far outweighs the supply. And unfortunately there is no magic fix for that.

There are two notable changes for Colorado moose, sheep and goats in 2019. First, the weighted point fees have increased to $50 for residents and $100 for nonresidents (per species). However they have also added the option for you to opt-out of additional points if you are unsuccessful in the drawing. So in practice that will save you the $50 resident or $100 nonresident fee if you do not want to gain an additional point. For some point holders this may make sense. For example, is it worth $100 as a nonresident to go from 2.4% odds this year to 2.7% odds next?

But be aware that even small, marginal gains in annual draw odds % can add up if your strategy is long term. Some basic spreadsheet math says that all things being equal, your chances of drawing a tag with constant 2.4% annual odds over the next 20 years is about 38.5%. But if you were to gain 0.3% odds each year along the way, 20 year chances rise to about 66%. A lot can (and probably will) change in 20 years of course.

And if you truly want to hunt Colorado moose, sheep or goats in your lifetime, you would be well served to avoid applying for those "top tier" hunts that have the most demand and the worst odds. Spreadsheet math on those hunts gets real depressing in a hurry.

Regardless of your time frame or strategy, there is one truth that is undeniable. Sit back, relax, and get comfortable - odds are that you are in for a long ride. Good luck in the draws!